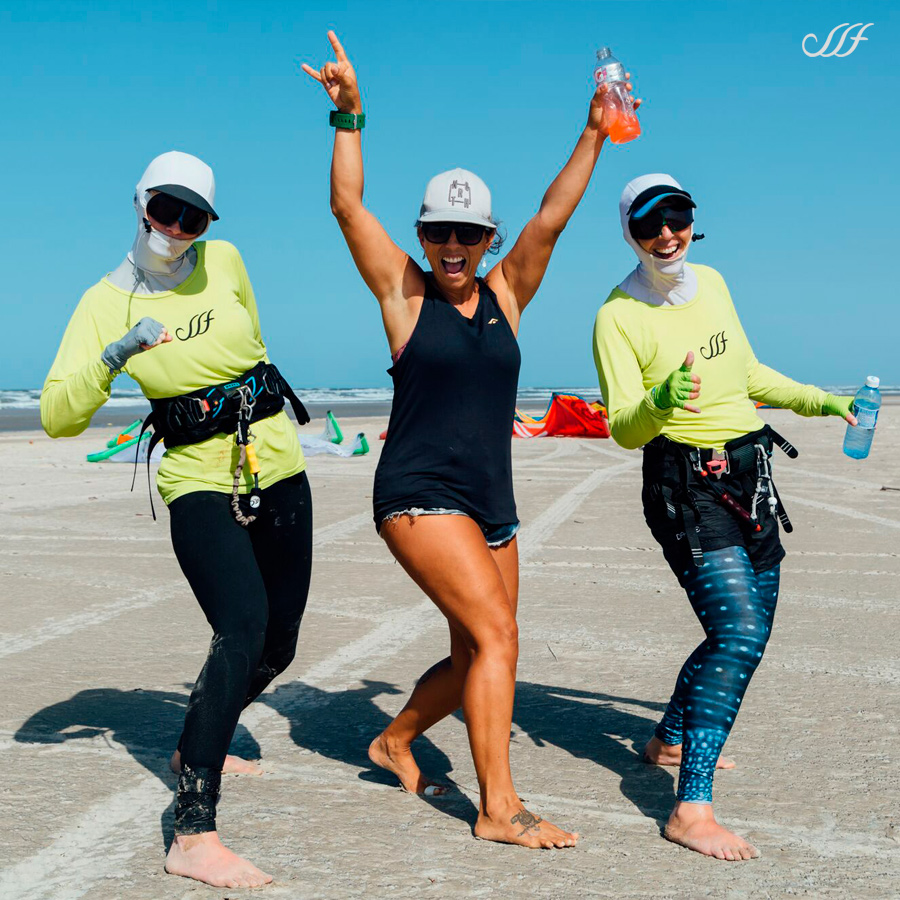 In 2013, Jalila Paulino was sent on a mission to explore and map the Northeast of Brazil, today known as the Terra do Vento. And since then, she has become the woman in front of and behind Surfin Sem Fim, a project she has helped transform into business with Marco Dalpozzo and e-group.

Jalila Paulino was born in São Paulo and holds a bachelor’s degree in tourism. When she was 20 years old, she moved to Rio de Janeiro and in 2008 she was introduced to kitesurfing in Barra da Tijuca, where she managed the K08 Kite Club for 4 ½ years. “Every day I was falling in love with the sport, which at that time was not very popular; I was doing a lot of work related to the organization of the kite club, the kite school, and the restaurant itself, where I already invited chef Claude Troigros to create a signature dish for the menu. But among all the responsibilities, what I enjoyed most was building relationships with the kiters, which made me fall in love with the sport even more. The people of this sport have a certain fascination and were doing everything they could to enjoy their vacant hours and getting that escape to go kiting,” recalls Jalila

The Queen in action

There was a great interest in knowing if the wind was good, especially during the week – when WhatsApp did not exist – and it was when Jalila found a communication tool that was a success among partners / kiters: a way to keep them informed of the forecast on a daily basis. “The feat was very good for the club as well, because there was an increase in attendance. We had great moments of evolution, going from the organizational part to the growth of the restaurant, offering healthy food to the practitioners, and events at sunset after a day of kiting; all of this increasingly complemented services and captivated more and more of those who went there,” says Jalila.

At that moment Jalila already had a great interest to be there in the ocean with everyone. So, she did some classes in Rio and Búzios, but she still was not confident and her work did not allow her to dedicate herself and her time. There was a passion to do more than observe and absorb all that, so that one day I could participate. Since then, she was sure she would learn and enjoy with everyone at some point in her life. Because after all, she had years of learning and many good friendships.

After her experience in Rio de Janeiro, Jalila moved to Australia for a year, where she continued to dream of and glimpse the kite scene in Brazil, because there were many fans on the other side of the world. “On my return to Brazil, I made a connection with the e-group staff for this current job. The first thing I did when I arrived in Prea was taking kite lessons and buying my kite equipment. I already knew what I wanted, all I really needed was to have another opportunity and take action.”

It was at Rancho do Kite that she improved her kiting and learned increasingly more in the day-to-day: listening to everyone’s advice was improving her kiting. With the development of the SSF she became more and more fascinated by the sport and met many athletes who taught her a lot. She observed, tried, failed, succeeded, and evolved… Today, Jalila has almost 10,000 kilometers kiting alongthe coasts of the world, mainly in northeastern Brazil. “For 6 years I’ve practiced kitesurfing, the sport that has transformed my life and my relationship with the sea,” says this passionate kiter, Jalila.

Cruising in the Delta

Today, the tourism specialist says she is fascinated by the downwind modality and also kiting in the waves. “I have kited in various places in Brazil, Peru, Mauritius, Tarifa, Cape Verde and I want to be able to explore new destinations, map new routes and travel with friends in search of the best waves and the best winds in the world,” says Jalila.

Jalila believes that the practice of kiting downwind in the northeast gives people a great foundation, because that region has access to different kiting conditions. This is the basic idea of SSF: to offer a safe and professional kiting on land and water. Besides making the kiter happy, evolution is guaranteed by the end of the trip. The development of the expeditions together with e-group brought a lot of know-how and networking. This helped with the growth of this year round project. In the Brazilian low season, she explores other countries with world-renowned coaches such as Mitu Monteiro and Guilly Brandao, who host and coach fans of the sport to evolve in their practice. In the second half of the year she dedicates herself to the expeditions in the Northeast.

Surfin Sem Fim counts on professional athletes and qualified guides to conquer the Brazilian coast and teach the other kiters new maneuvers and downwind techniques, so that everyone can improve exactly where they need it most and each day they perform better than the last. Routes are developed for different levels of kiters, starting with the short beginner and easy routes to the incredible Delta Route and challenging Ultra Man options.

“I am very happy to be able to share all these memorable experiences and moments I have with SSF and others. My goal is to be an example and to bring more and more courageous and engaged women into the sport, enabling them to discover and evolve in the sport,” concludes Jalila.

Photos by: Eliseu and Analice Diniz