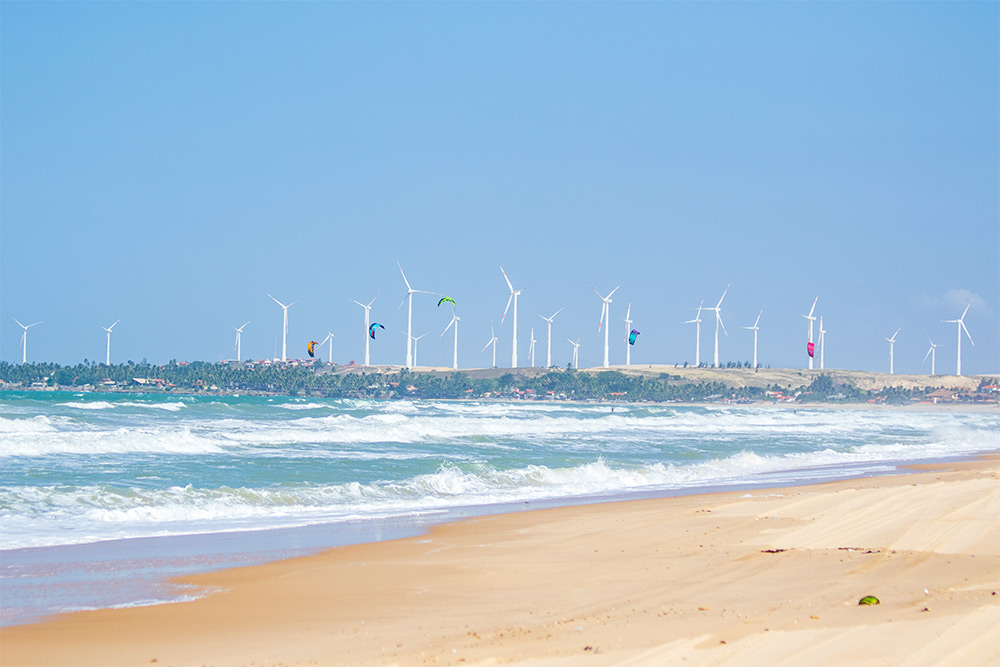 With 573 kilometers of beach, Ceará is a reference in the practice of water sports. Amidst the paradisiacal sceneries of the Ceará coast, sportsmen – amateurs and professionals – from all over the world come to the state to venture into regions that have ideal conditions for kitesurfing, windsurfing, wing foil (or wingsurfing), among other modalities. Directly and indirectly, the search for the sport mecca on waves moves the local economy.

The most recent data from the Ceará Department of Tourism (Setur), released in January 2020, points out that 3,708,821 tourists passed through the State, generating income of more than R $ 20 million. Of this number, 382,009 stated that the reason for the trip was “adventure sport” tourism, representing 10.3% of the total value. According to the survey, 70% identified themselves as practitioners of kitesurfing, the main sport practiced on the coast of Ceará.

The beaches of Jericoacoara and Preá, located in the neighboring municipalities of Jijoca and Cruz, are among the favorite destinations for those passionate about water sailing. In addition to enjoying paradisiacal scenery, sailors can glide over the seas of the Ceará coast with perfect wind conditions, a determining factor for the practice of these modalities.

In addition to Jericoacoara and Prea, the beaches of Cumbuco (Caucaia), Paracuru, Canoa Quebrada (Aracati) and Porto das Dunas (Aquiraz) receive the elite of water sports, especially kite. Thus, the kites raised in the sky guiding boards that slide over the sea became a portrait on the horizon.

Meteorologist at the Ceará Foundation of Meteorology and Water Resources (Funceme), David Ferran explains that the State has a unique mix of factors favorable to water sports. In Ceará, the trade winds, mainly in the second semester, have regular characteristics and intensity of gusts between 15 and 25 knots.

“This regularity is an advantage when the tourist is going to buy a ticket to do kitesurfing here. He can buy two years in advance for August or September, for example, since the probability of winds is very high. The chance of buying and not having wind is small ”, he says.

Associated with the wind, Ceará has long beaches with few people. The mild water temperature and the absence of a history of shark attack are other highlights.

The characteristic of the wind, which blows parallel to the coast, reduces the risk in the event of setbacks such as equipment breakage. In this way, the kiteboarder would not be pushed into the sea.

Apart from climatic conditions, Ceará has infrastructure that facilitates the access of “radical tourists”, with aerial and road networks. Those who come to the state have accommodation options from simple to luxurious along the coast of Ceará, with surroundings dedicated to practitioners with offers of transport, equipment and professionals.

Marco Dalpozzo left a job at a multinational company to live in Jericoacoara, became partners in inns and provides an adequate structure for worldwide sailors.

Where the wind makes a curve: the italian who lives between Jeri and Preá

It was a morning in 1995. The Italian Marco Dalpozzo opens the window of the inn where he was staying with his wife, on the beach of Jericoacoara, in Jijoca (283km from Fortaleza). The landscape touched the European, who sought in Ceará the ideal conditions for sailing. The cry of charm was the call of home.

It was time to disarm the tent because life would now be dedicated to extreme sports and tourism in the region.

“There are some things in life that have strength in beauty, go beyond the smile and make us cry. My wife took me to meet Jeri. When I saw that, I was moved to the point of crying. And when that happens it is extraordinarily beautiful. It is a painting, something designed by God”, he recalls.

From this episode on, Dalpozzo decided to make Jericoacoara an address. At the time, the Italian was an executive at a multinational company and was expatriated to work at a unit in São Paulo. Passionate sailor for water sports, he started to travel around Brazil behind the peak of dreams.

“Ceará has the best wind in the world, it is the land of the winds, blessed”

Since then, the Italian left the company and became a partner at Vila Kalango, in Jeri, and Rancho do Peixe, in Preá (Cruz). Enchanted by the wind from the coast of Ceará, Marco started to dedicate himself to receiving and providing the structure for sailors from all over the world. In both places, tourists can practice sports such as kitesurfing, windsurfing, wing foil, among others.

“Between Jeri and Preá, the wind makes a curve, it is the strongest point. There is always wind. It is a region which must live off the wind, it is a precious resource. It is the best in the world, in addition to generating jobs with sport, energy and other types of socioeconomic activities. In Italy, we have snow sports, regions that develop tourism linked to snow. Here we have to do the same thing, have a priority industry for the sailor ”, he explains.

Marco is the creator of the first “Water Sport Center” in the North-Northeast, located in Jericoacoara and created to meet the high demand of the public looking for adrenaline in the salt waters of Ceará. In the sports center, a partnership between the Pousada Vila Kalango and the Tico Wind school, it is possible to sail, surf, and learn new kite and windsurfing modalities such as wind foil and wing foil.

The Italian also created Surfin Sem Fim, a project that offers experiences through downwinds – a sailing modality in which long journeys are made from one point to another. Participants make a real trip gliding through the seas of the Ceará coast.

“It is a trip from point A to point B, all in kite. It is a feeling of total freedom. For example, going from Cumbuco to Jeri in three, four days, all the way across the sea. Sleep in different places. There is a whole logistics organization to take things from one place to another. There is a team that manages the trip. We have already done different stages, we have already gone from Natal to Macapá with tourists ”, he details.

The wingfoil, or wingsurfe has the “kite” (wing) directly in the hands of the surfers, giving total control for the flight. Jericoacoara, extreme sports.

Wing foil: meet new sport that was fever in Ceará

The practitioner of the sport glides over the waters, holding a kind of inflatable wing with both hands. On the feet, the board – called foil – has a giant keel with wings.

The current sensation in the water sports universe is the wing foil. And as Ceará is the mecca of this microcosm, the “winged board” also flies here. The beaches of Jericoacoara and Preá are pioneers in the State in the practice of the sport, which has become the fever of the moment and has seen demand increase.

The search for wing foil already represents about 80% of the clientele of Tico Wind, a school located in Jeri, in the first season of the sport. The owner of the space, the Argentine Eduardo Giudici, who has lived in the “fishing village” for 13 years, is used to witnessing the passion for water sports in the region and the emergence of new modalities.

Wing foil lessons (wingsurfing) on ​​the sands of Jericoacoara and Preá beaches, which also receive windsurfing and kitesurfing.

When he landed in the state in search of the ideal conditions for windsurfing, he found in Jeri the point of dreams and the address for the family. He left his formal job in a systems company to continue his life in the winds of Ceará.

Wind was the first sport to attract sailors from all over the world to the beach in the municipality of Jijoca. Then came the wave of kitesurfing. “Now the fever is on the wing. It’s like that, crazy. I experienced what happened when the kite arrived. It moved tourism. Now the biggest demand is for the wing. Europeans are coming after the new sport, ”he says.

The “flagship” at the Tico Wind school has always been windsurfing. Until the arrival of the wing foil. Passionate about the sport, Guidici listened to the advice of his longtime friend, businessman Marco Dalpozzo, with whom he signed a partnership in the Water Sport Center project, and invested in the new sport.

“Europeans are coming after the new sport”

“He told me to believe it would work. And it’s skyrocketing. It looks like kiting, but there is no line. I’m right at sea with wing classes ”, he celebrates.

One of the first wing foil practitioners in the region, the professional athlete and instructor of kitesurfing 20 years ago, Eduardo Fernandes, explains that the demand soared at Praia do Préa, in the municipality of Cruz. Manager of the Rancho do Peixe inn, he says that 70% of the project’s public is formed by sailors.

“A great search for wing classes in Prea and Jeri started. It is a new thing. We started to disclose since the end of August that we have the perfect destination for the wing. And this new fever was already out there. There is an exponential increase ”, he commented.

In November, even with the pandemic of the new coronavirus,  Ceará hosted the first world championship of wing foil. Praia de Iracema, in Fortaleza, was the stage for sailors from all over the world to take risks on the waves and be pushed by the winds of the Ceará coast.